Coming together!
Stuff from every which way.
Will it hold, will it?!

In the interest of trying something new, and in the hopes that the particular design would be better, I tried AndyCart's Spectra line approach to connecting the rods with the effector/carriages, instead of magnets or Traxxas joints. I had believed that this would be a lighter alternative to magnets, with all of their benefits, but the final results were a bit more mixed. 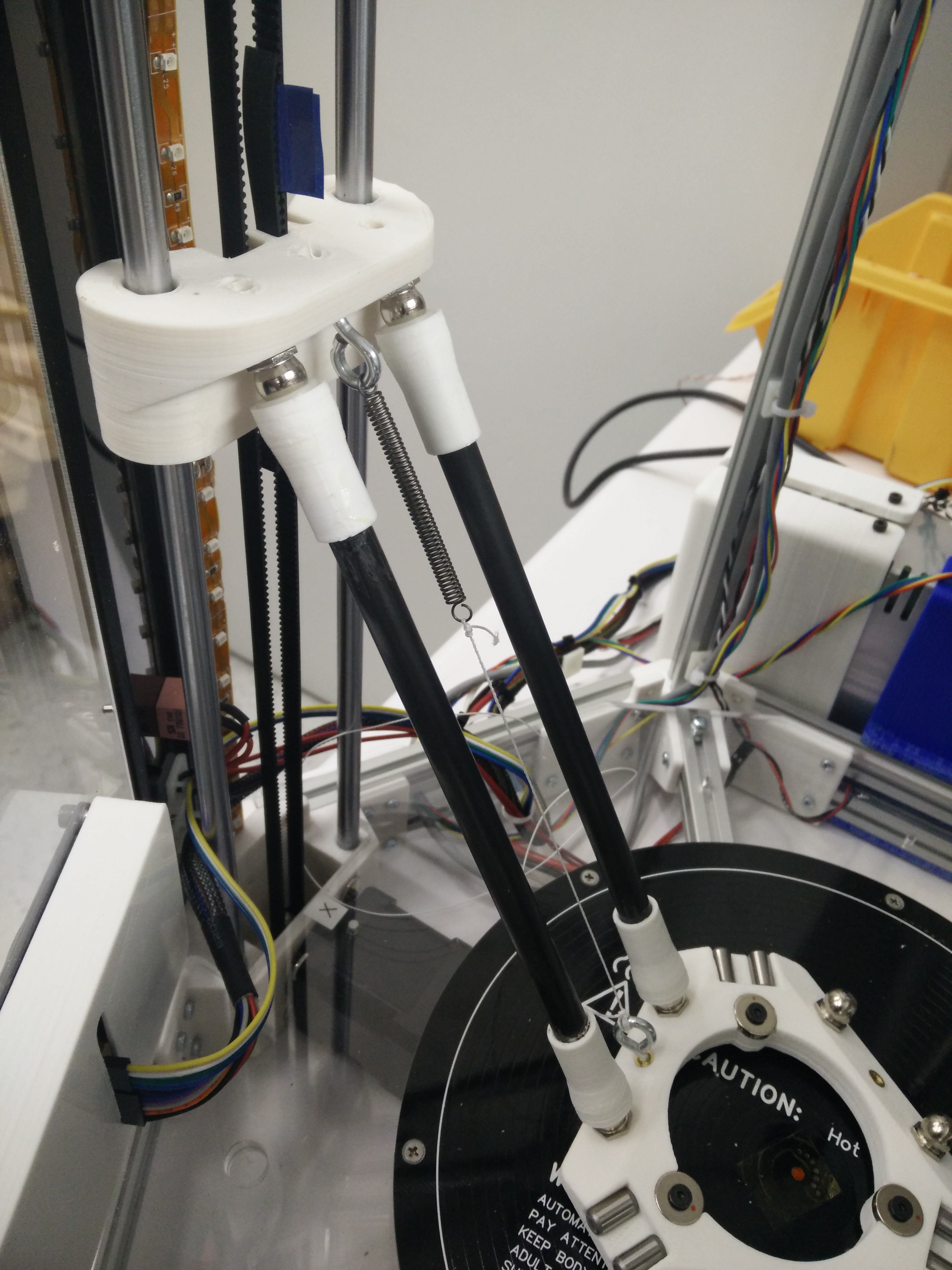 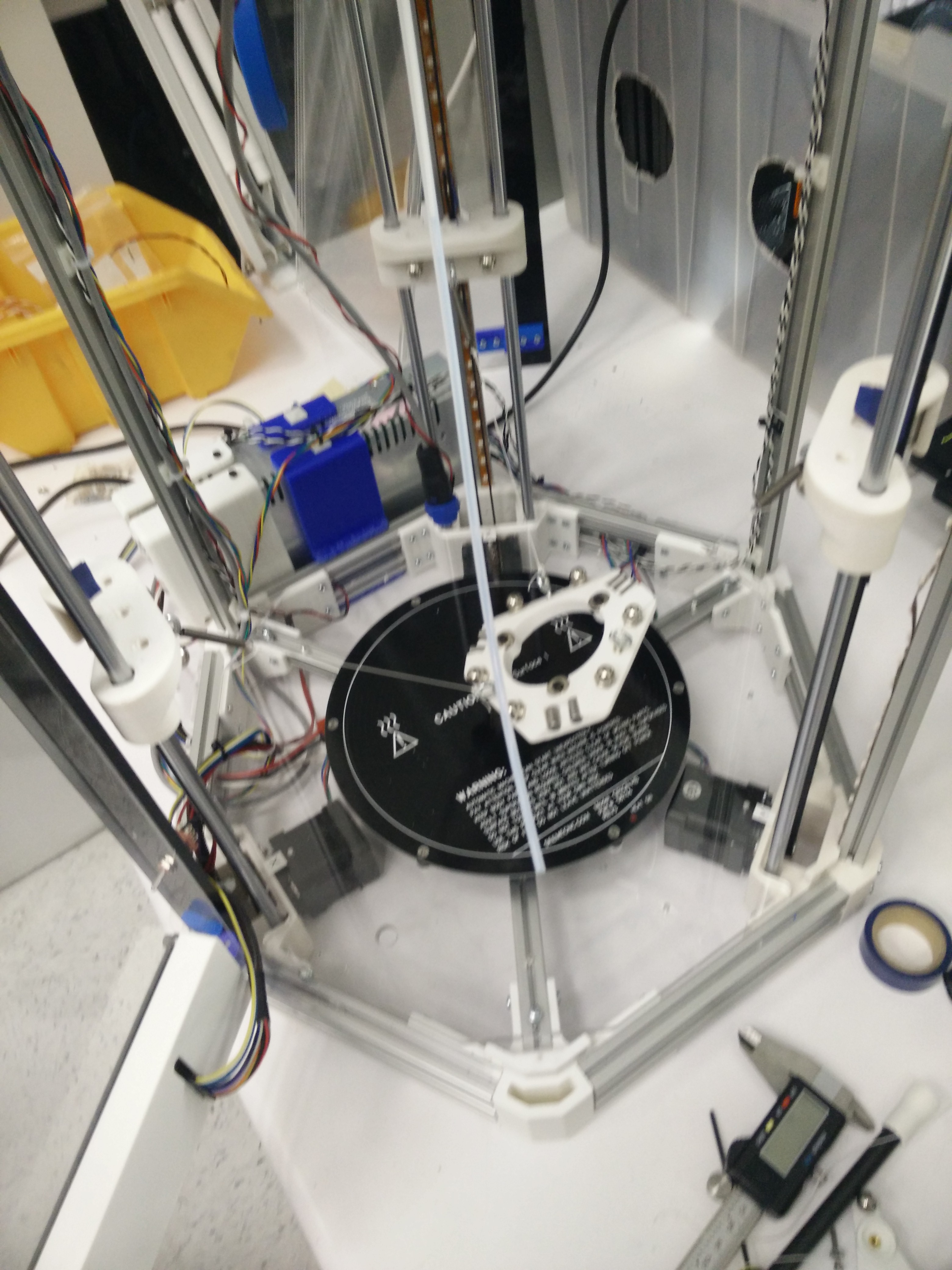 I added some 6-32 eyebolts and heat-set inserts to better anchor the tendon and extension spring. The 6-32 eyebolts were the smallest I could find from a reliable vendor (though admittedly, I didn't try very hard). The previous examples I had seen just tied the tendons directly to the effect and carriage. As it turns out, the prior approaches may be better, since the tendon attachment point should ideally be in-line with the center of rotation. If there's an offset, than you would get different compression forces in each of the rods, resulting in a loss of contact once you move sufficiently far from center. To mitigate this issue, I added offsets onto the metal spheres: 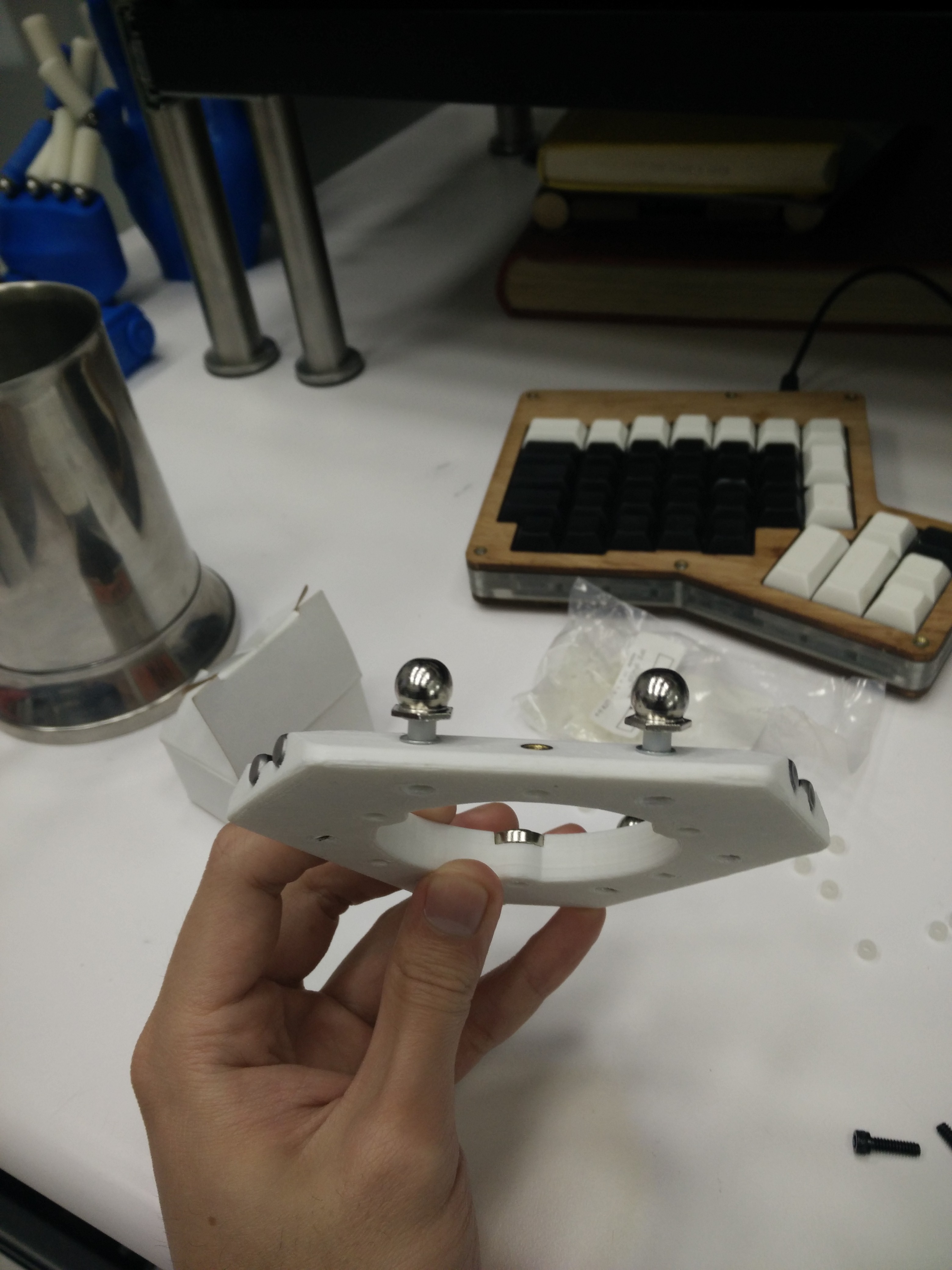 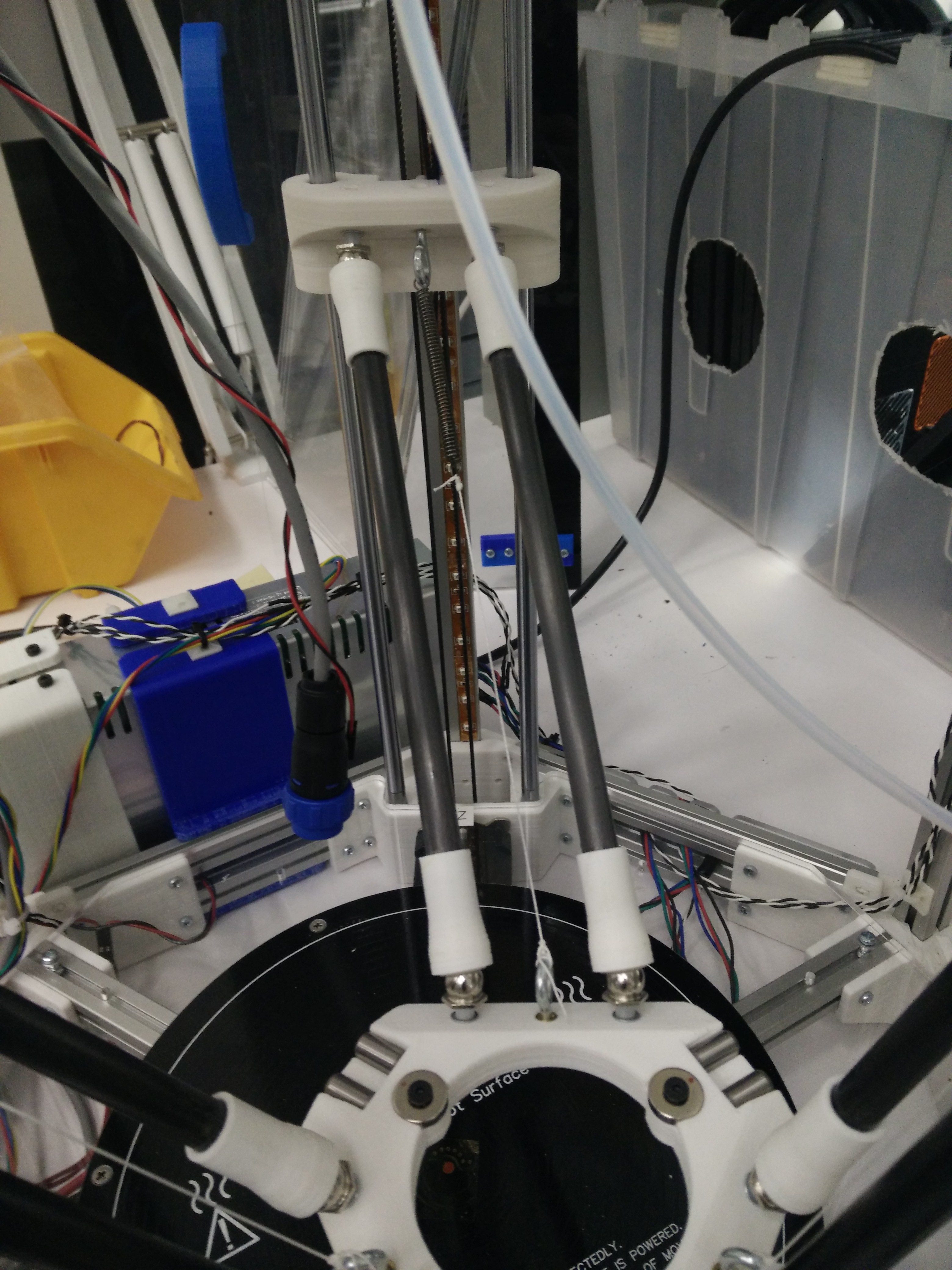 The nice thing about the tendons is that the effector itself should never fall completely off, whereas that was always a possibility when using magnets. However, if the rods ever disengage from the metal spheres, the print is still likely unrecoverable. A different failure, but still a failure. On the workspace boundaries, it's also a bit difficult to determine whether the rods are beginning to disengage. Magnets (imo) still might be the better choice, though an extra tendon running between the effector rods could be a nice additional safety feature to help mitigate rod failures.

To try and make the design more compact, I put the extruder setup within the frame itself, instead of mounting it above or outside. I thought this would minimize the bowden tube length (short of converting to "flying extruder" or "air struder" setup) and make the overall assembly cleaner. Unlike the flying/suspended extruder setups, the distance between the extruder outlet and the nozzle inlet on the effector still changes, and once the distance becomes too short, such as when the effector is parked at the home position, the bowden tube tends to wrap up onto itself. Since I'm using my swappable magnetic effector design, I would now run the risk of knocking off my nozzle everytime I home. 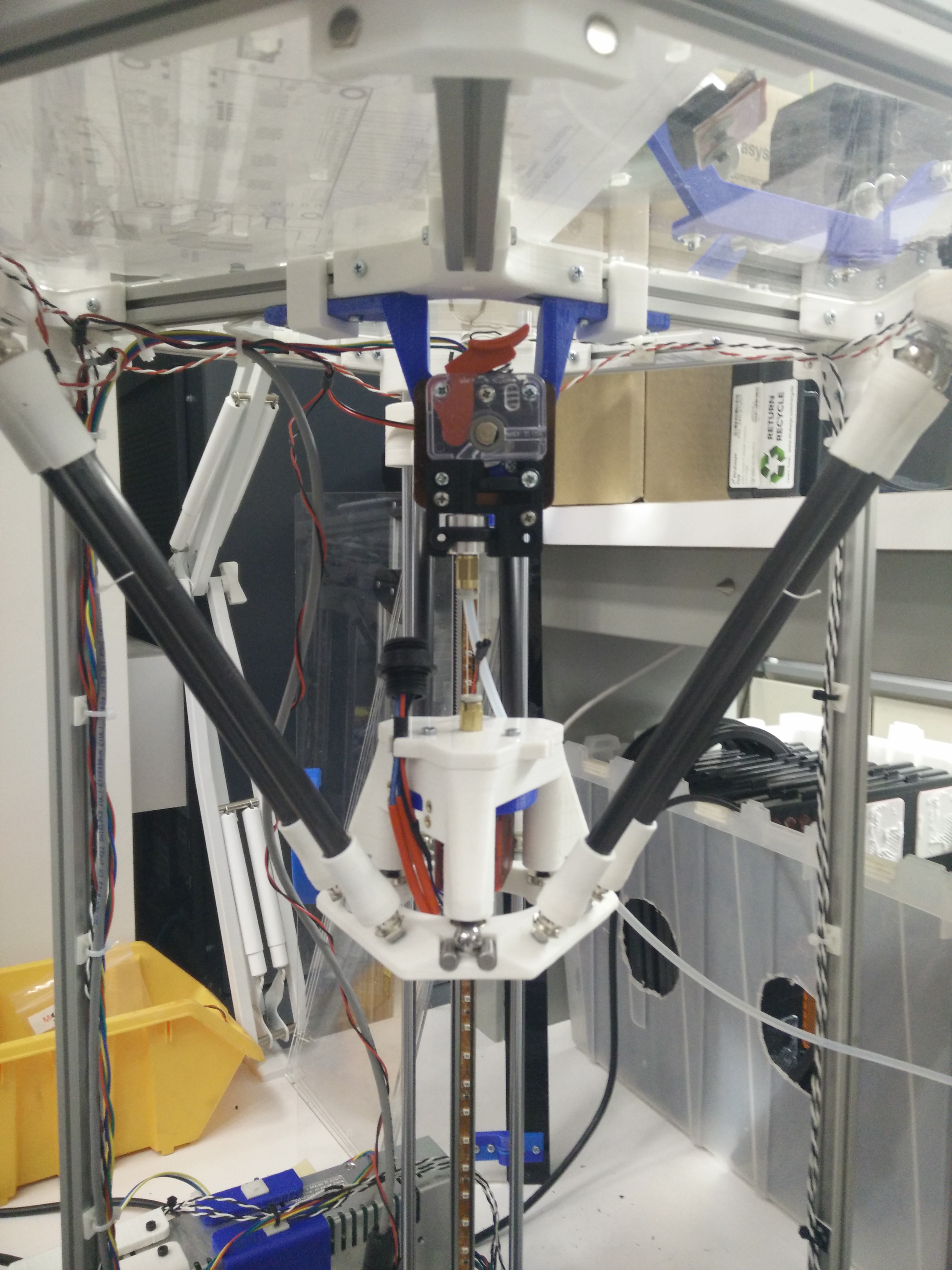 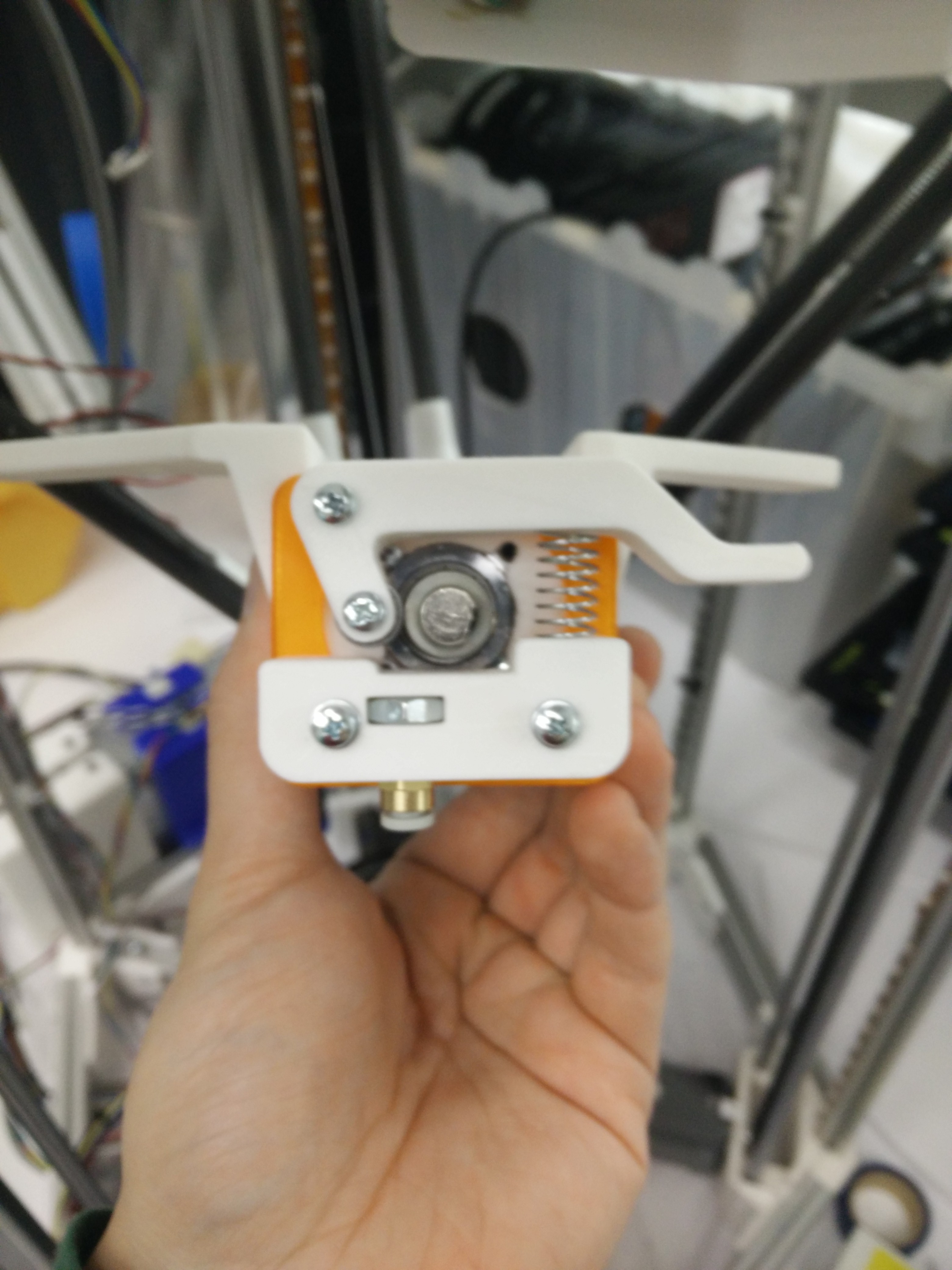 For now, I just made the extruder mounting bracket and the assembly itself as minimal as possible, and it looks like the homing at least won't cause catastrophic issues for now. Bowden tube entanglement could be a much more serious issue for swappable print-heads, unless they can be moved entirely out of the print workspace between use.